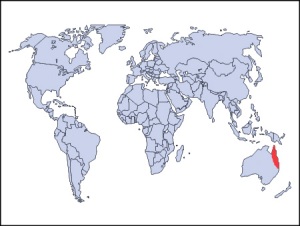 Australia, which was apparently intended only for the very bravest of human beings, is home to many of the world’s most poisonous snakes, spiders, and scorpions. Even the surrounding ocean is exceptional for the number of ridiculously venomous species it contains. Still, a person could be forgiven for thinking that, so long as they stay out of the water and keep away from the creepy-crawlies, they’ll be okay. Ha ha ha… nope. In Australia, everything is out to get you.

Meet Gympie-Gympie, the Stinging Tree (or to be more accurate, stinging shrub). Growing in rainforest clearings and along creek edges- anywhere the canopy is broken- this two metre (6.5ft) high plant has large, heart-shaped leaves and juicy purple fruit. And every square centimetre of it, from the soil on up, is covered in tiny, poison-filled hypodermic needles. These hollow silicon needles are delicate enough to break off at the slightest touch, leaving them embedded in the skin of whatever creature was unfortunate enough to do so. The skin will often then close over them, making the needles nearly impossible to remove. The substance they’re filled with is a very potent neurotoxin with a very long shelf life- herbarium specimens of the plant collected in 1910 are still able to cause pain. And since the body is unable to break down silicon, this all adds up to a very long punishment for a very small mistake.

A brief brush against a stinging tree produces intense pain that peaks after about half an hour, but can literally take years to subside completely. Numerous dogs and horses have died because the pain was so intense. There is even one official record of a human having died- a Dutch botanist of the 1920s. Oddly enough, no actual tissue damage is done by the neurotoxin- death due to the plant is attributed to heart failure due to the shock of the pain, described by one researcher, Dr. Marina Hurley, as “like being burnt with hot acid and electrocuted at the same time.” An ex-serviceman who fell right into one of the trees while crossing a creek in the 1940s describes having had to be tied down to his hospital bed for three weeks because the discomfort was so intense. One intrepid/insane researcher actually purified the neurotoxin and injected himself with it, suffering terribly and thereby proving that the toxin, rather than the needles, causes the majority of the pain. But not all of it… simply standing near a gympie-gympie for an extended period can cause allergic reactions and nosebleeds as the needles are shed in the wind.

So this must be just about the best herbivore-defence system ever, right? Amusingly, no. The trees still undergo heavy damage due to hungry spiders, ants, snails, and especially beetles, all of which can avoid its defences. The tree is even prey to one species of marsupial, the red-legged pademelon, which is either immune to the neurotoxin or has enormous pain tolerance. So why develop this extensive arsenal if it’s completely ineffective? One expert has suggested that it may have evolved to protect the plants from the now long-extinct giant Diprotodonts which once inhabited the Australian rainforest, making it one more dangerous relic of a long-ended war. You win, stinging tree, you win.

[Fun Fact: The best way to attempt to remove some of those poisonous silicon needles embedded in your arm?  Wax hair removal strips, according to the Queensland ambulance service.]