A.K.A.: Claviceps purpurea (and other Claviceps species)

Found: Throughout temperate and tropical regions, though historically most problematic in Europe, Africa, and North America

Disrupts human history and generally scares the hell out of people, to put it mildly. But before we get into that, let’s start with what this stuff is. An ergot infection begins when a microscopic fungal spore lands on the open floret of a grass plant. In northern agricultural areas, rye and, to a lesser extent, barley are particularly susceptible to these spores. Once on the receptive flower, the spore behaves as though it were a pollen grain, growing down the style until it reaches the ovary. At this point, it destroys the ovary and links into the adjoining vascular tissue, where it can parasitize the plant for nutrients.

With plenty of food on tap, the fungus grows into the space that the grain would have otherwise filled. Early on, it forms into a soft, white mass that causes a sugary liquid to drip from the flower. This liquid is filled with spores and is spread to other plants by hungry insects as they fly from flower to flower. Later in the growing season, around the time neighbouring non-parasitized grains are ripening, the fungal mass dries and hardens into a sclerotium (a sort of fungal seed body) that looks a bit like wild rice, and drops to the ground. This sclerotium will sit dormant on the ground until spring, when moisture will cause it to sprout small mushrooms, which produce spores for the new season.

Still reading? Good. Here’s the interesting part. Let’s say you’re a farmer in the Middles Ages, and the infected plants in question are in your field. Before the ergot sclerotia drop to the ground, they get harvested with the rest of the crop, and end up getting made into bread for you and your family. Well, it turns out those sclerotia are full of a toxic alkaloid called ergotamine, and after eating enough loaves of bread to build the compound up in your systems, you and your nearest and dearest have contracted ergotism. Fed some of that rye to your cows? Now they’ve got it, too!

Ergotism delivers a one-two punch of physical and psychological symptoms. Physically, the alkaloid constricts blood vessels, leading to an intense burning sensation in the arms and legs which can eventually cause gangrene and loss of the entire limb. Some sufferers also develop a persistent ringing in the ears. That’s before the seizures and untimely death set in. Psychologically… well, it makes you crazy. As in, hallucinations and irrational behaviour, which lead many victims to be ostracised by their communities. Ergotism is speculated to have been the cause of the Dancing Mania (not as fun as it sounds) that hit Europe in the Middle Ages. Huge numbers of people were struck by an uncontrollable urge to dance – violently and while screaming – until they collapsed from exhaustion. Did I mention that this stuff is where LSD came from? The drug was originally synthesised from ergotamine, handily delivering all the craziness with none of the gangrenous limb loss.

The cure for all this horror? Well, if you got to it early enough, simply not eating any more contaminated grain would cause symptoms to slowly abate. Unfortunately for medieval peasants, who ate a lot of rye and suffered most of history’s outbreaks, the cause of the disease was completely unknown. Weird-looking sclerotia were so common that they were thought to be a natural feature of rye. That old standby, “It’s the wrath of God” actually seemed supported, since sufferers who left the affected area on pilgrimages immediately began to show improvement (hence another term for the disease, ‘Holy Fire’). Sadly, it took the better part of a millennium before someone worked out what was really going on, and major outbreaks occurred right up to the 19th century. Even in the 21st century, minor outbreaks have occurred in developing countries, such as the case in Ethiopia in 2001, caused by infected barley.

Speaking of disrupting human history, some researchers have speculated that an ergotism outbreak caused the strange behaviour that resulted in the Salem witch trials of the late 17th century. Others have disputed this claim, noting, among other points, that ergotism was known and recognisable by this point in history. We may never know for sure.

[For other historical events in which ergotism may have played a role, check out the first reference below.]

[Fun Fact: Due to its action as a vasoconstrictor, ergotamine is now used, in purified form, to treat migraines and post-natal bleeding.]

Found: Tropical forests throughout the world 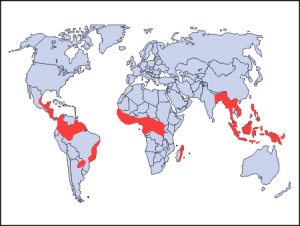 Despite all the advances of modern neuroscience, the fact is, human understanding of brain chemistry and its manipulation still has a long way to go. Much to the chagrin of those plotting world domination, we won’t be chemically controlling each other’s minds any time soon. How embarrassing then, that a mere fungus seems to have perfected this technique. Almost fifty million years ago. Scooped again, humanity.

It begins with an ant walking along the ground, deep in a tropical forest somewhere. This ant, Camponotus leonardi, lives high in the trees, but must occasionally come down to cross from one tree to another when there is a break in the canopy. As it walks, a minute fungal spore drifts down from above and lands in its back, unnoticed. The unseen spore springs into action, producing an enzyme which breaks down the ant’s exoskeleton just enough to allow a fungal hypha, like a tiny root, to enter. The host’s fate is now sealed.

While the ant climbs back up into the canopy and goes about its business, the fungus grows through its insides, breaking down and consuming the non-vital soft tissues as it goes, keeping the animal alive even as it is being eaten. Soon, the fungal tendrils reach the brain and begin to produce chemicals which affect the host’s behaviour in very specific ways. First, it will experience convulsions that cause it to fall out of its tree. These will continue periodically, preventing it from returning to its colony. Over a period of hours, the ant will then wander, erratically and aimlessly, over the ground and low-growing plants.

This is where the precision of the fungus’ mind control becomes truly impressive. At solar noon, when the sun is highest in the sky, the infected ant will abruptly climb the stem of a small plant and find a leaf pointing north by northwest at a height of 20-30cm above the ground. Yes, really. No one knows how this jaw-dropping specificity is accomplished, but it’s what the fungus wants, providing a temperature of 20-30 degrees Celcius (68-86F) and a relative humidity of around 95%. In cases where ants were experimentally moved to different heights or orientations, the fungus was unable to reproduce properly.

Having found the perfect leaf, the zombified ant will go to its underside, find a major leaf vein, and just bite down on it as hard as it can. The fungus has already destroyed the muscles required to release this grip, and so there the ant stays, slowly dying over the course of the afternoon. Once its victim has been dispatched, the fungus grows toward the leaf, further anchoring itself to the plant. Around a week later, the parasite completes its horrifying circle of life by growing a fruiting body, similar to a mushroom, from the back of the dead ant’s head. This will open to release thousands of tiny spores, raining down over any potential hosts which may be walking below.

While the fungus is able to infect other, closely related, species of carpenter ant, it has less precise control over these hosts and isn’t always successful in getting the ant to do its bidding, suggesting that even minor variations in brain structure can stump it. So we’re probably safe from the fungal zombie apocalypse. At least for the time being…