A.K.A.: Genera Atta and Acromyrmex of Tribe Attini 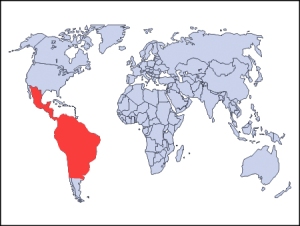 Once in a while, I come across a species that’s just so strange and interesting, a single post doesn’t seem to do it justice. With that in mind, welcome to part one of the wonderous life of the leafcutter ant.

Let’s begin at the start of it all – a new colony being founded. This happens when a fertile, winged female and several fertile, winged male ants (called drones) are born and grow to maturity. One day, the winged crew will fly away together and engage in what’s called a nuptual flight, where the female mates with several different males (up to seven in some species) while in mid-air. Having accomplished what is literally their only purpose in a short, glorious life, the drones promptly die, while the new queen scouts out a good place to start her colony. Finding it, she yanks off her own wings, never to fly again, as her body starts to break down her flight muscles, using the energy to produce eggs.

Ant reproduction is remarkable in that actual mating occurs only once in the queen’s life. The males of her nuptual flight together provide hundreds of millions of sperm that will be the basis for the entire colony to come. At the risk of sounding like a weirdo, ants have amazing sperm. A human sperm cell, under ideal conditions, can survive for up to five days. If they don’t get the job done in that time, they’re finished. The sperm of leafcutter ants, having been collected by the queen, can live for up to thirty years. That’s probably older than a lot of the people reading this. They can spend decades just waiting around in storage for the egg with their name on it. And that’s not all- they come armed. As in, chemical warfare. The seminal fluid of ants contains compounds that can lower the survival of rival sperm (from other drones) while not harming those of the ant they came from. Weaker sperm are thereby killed off early in the game. Of course, this kind of thing doesn’t go on for a long time. The storage organs of the queen contain their own fluid that will neutralize chemical weapons on the way in. Think of it as the metal detector at the door.

Right. So the queen has her new place picked out and the on-site sperm bank is up and running. Time to make a colony. What she needs first are workers. In a small chamber she’s excavated underground, she begins to lay large numbers of eggs. These serve two purposes, because the early hatchers will eat the late hatchers until the food supply gets built up. It pays to be a bit premature when you’re an ant.

Nearly every worker born to the queen over the life of the colony will be a sterile female, and each will belong to one of three major castes- minimae, mediae, and maximae. These castes will dictate both their size and function in life. Sensing the needs of the colony, the queen can actually control which type of worker she is producing. First come the minimae, which are the smallest caste and will principally tend the underground gardens which are the colony’s food source (more on ant agriculture in part two), as well as acting as nurse-maids for growing larvae. Next are the mediae, which are larger and act as the colony’s foragers, bringing plant material with which to fertilize the gardens, and defending against minor threats or obstacles in the troop’s path. Finally, once the colony has reached a population of several thousand, come the maximae, or soldier ants. These big brutes are up to thirty times the mass of a minima and do all the heavy lifting, carrying bulky items, moving big obstacles, and cutting tough pieces of vegetation. They’re also the last line of defence when something serious threatens the colony or the foraging parties. And because ants are all about organisation, within each caste, there are numerous sub-castes which are responsible for specific duties, depending on which species we’re talking about.

Over time, leafcutter colonies can become impressively large, comprising over 5 million residents- the population of a major human city. It’s amazing to consider that these are kept running smoothly without central authority, technology, or the aid of written or spoken language. Not to mention opposable thumbs.

Tune in next week for a look at leafcutter agriculture, their interesting relationships with symbiotic fungi and bacteria, and why ants give each other piggyback rides to work.

3 thoughts on “Hidden Kingdom, Part One”