The first in an ongoing series of biology’s greatest duos. (Here’s Part 2 and Part 3) 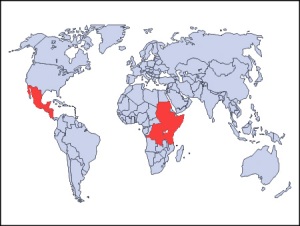 Life as a tree is tough, particularly when you live in a part of the world that’s home to the biggest herbivores on Earth and happen to have delicate, delicious leaves. Such is the case for the African acacias. Without sufficient defences, they’d be gobbled up in no time by elephants, rhinos, and giraffes. The trees are known for having huge, sharp thorns, but even that’s sometimes not enough; the lips and tongues of giraffes are so tough and dexterous, they can often strip the leaves right out from between the thorns. So what’s a stressed acacia to do? Recruit a freaking army, that’s what.

A few species of acacia in both Africa and Central America (where the herbivores are smaller, but no less voracious) have developed a symbiosis wherein they enjoy the services of ant colonies numbering up to 30,000 individuals, tirelessly patrolling their branches 24 hours a day. Should a hungry elephant or goat wander up and take a bite, nearby patrol ants will call in reinforcements and soon the interloper will be utterly overrun with angry, biting ants. What’s more, the protection extends beyond just animal threats. The ants will go so far as to kill other insects, remove fungal pathogens from the surface of the tree and even uproot nearby seedlings because, you know, they might eventually steal some sunlight from the beloved acacia.

So what do the troops get out of this? Quite a bit, actually. In ant-protected acacias (‘myrmecophytes’, they’re called), the thorns that normally grow at the base of a leaf swell up. In the Central American species, they grow into something that looks like a bull’s horn (hence their common name), while the African ones become more bulbous. These specialized structures, called domatia, are hollow inside and serve as very convenient housing for the ants. What’s more, the trees produce not one, but two different kinds of nourishment for the colony- regular, and baby food. The adult ants will feed from a sweet liquid exuded by nectaries on the branches. Meanwhile, on the tips of the tree’s leaflets, small white structures called Beltian bodies are formed which are high in the protein every growing child ant-larva needs. These are collected by workers and inserted right into the larval pouches, to be eaten before the ants are even fully formed.

Sounds like the perfect partnership, right? Usually, yes, but in nature, a symbiosis is only a symbiosis until one side figures out how to take advantage of the other. From the ants’ side, for example, any energy spent by the tree on reproduction is energy not spent on new homes and sweet, sweet nectar for them. Therefore, the ants will sometimes systematically nip all the flowers off the tree as it attempts to bloom. They’ll also prune the acacia’s outward growth if those new shoots may come into contact with a neighbouring tree, allowing invasion by another ant colony. Conversely, if herbivores become scarce and the acacia no longer requires such a strong protection force, it will begin to produce fewer domatia and less nectar in a move to starve some of the ants out. This has been shown to actually be a bad strategy for the acacia, since the soldiers, not to be outsmarted by a tree, turn to farming and begin raising sap-sucking insects on the bark, thereby getting their sugar fix anyway. And so it goes, oscillating between advantageous partnership and opportunistic parasitism… like so many things in life.

[Side note: While I’ve never personally encountered ant-acacias, I have disturbed an ant-protected tree of another family in the rainforests of Guyana, and can attest to the fact that the retaliation was both swift and intense. I was in a small boat at the edge of a river collecting botanical specimens, and I nearly jumped in the river to escape the onslaught. Don’t mess with ants.]